A review of the film Wonder, better late than never (and a little longer than normal)

I saw the trailer for Wonder through social media. I was in tears. Others saw the movie. They told me it had a great message about bullying. I waited for an opportunity to see it.
After my son’s third craniofacial surgery, we were passing the time between tears in the hospital room and I saw it in the movie selection, Wonder. 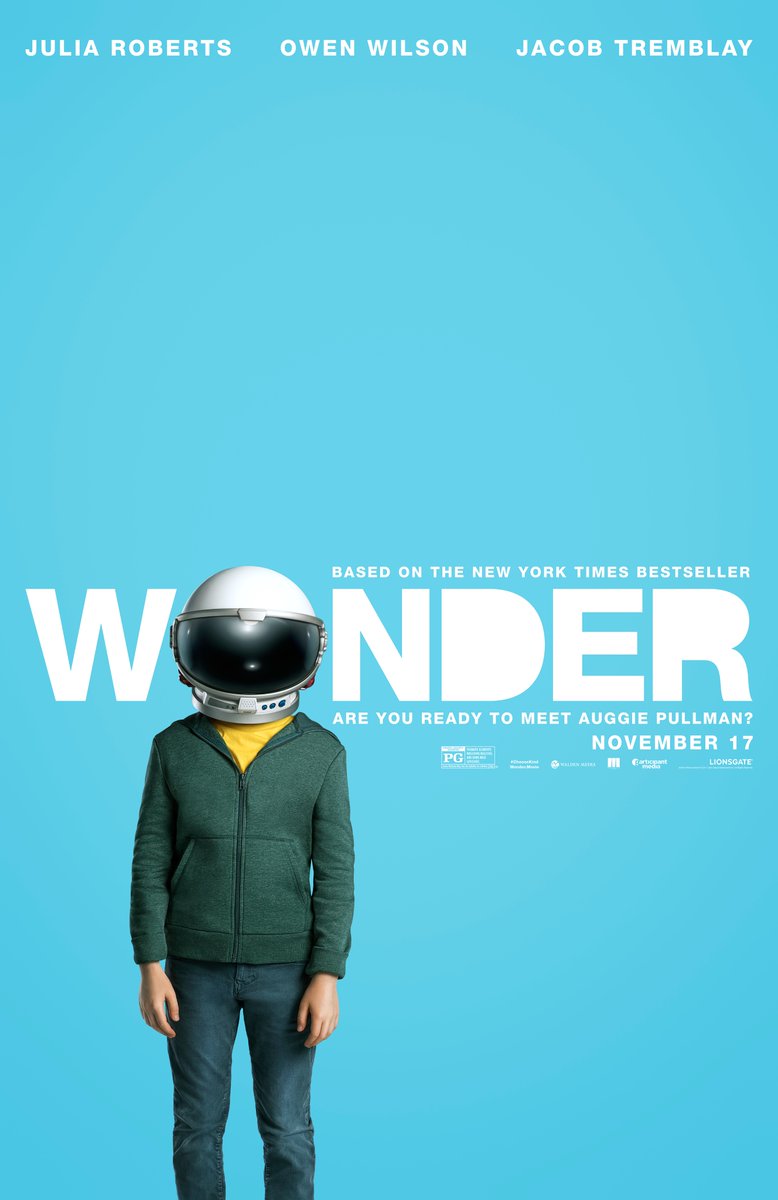 While strong in many parts, and overall, pleasing, I felt bothered at the end. Why was that? My conversation with Peg Langham, Nurse Practitioner for UCSF’s craniofacial team revealed why.
It was interesting to me that friends gravitated to the anti-bullying message. I heard from others that the movie did a great job revealing the experience of the sibling who is in full health. The conversations between mom and daughter were, by far, the most poignant to me having already seen the best speech between mother and son in the trailer. This is a pain that lays on the shoulders of medical moms, how to care for the others who need less care. I could hear my daughter’s words in what her daughter said. It was a step up for Hollywood to show a neglected sibling who was not bitter, resentful or rebellious, just lonely and longing.
But while the movie showed the mother’s anxiety and vigilance, it did not show her perspective or her son’s perspective gained from having gone through medical life. As Langham put it, there are certain strengths they did not touch on. One does not go through that life neutrally. It either breaks you or builds you in remarkable ways.

The movie based on a book. The book is written by a woman inspired by an experience in which she responds poorly to her child’s reaction at the sight of another human being whose face was deformed. Indeed, the conversation between a friend’s mother and her son (the friend) is the best in the entire movie. It is the outsider’s perspective looking in, which may account for its strengths and weaknesses.
Auggie suffers from a genetic condition, Teacher Collins syndrome, which caused severe facial abnormalities, and hinted at issues with breathing, eating, but not sight or speech. He has had 27 surgeries. He would have been to our same type of clinic, seen our same type of doctors. Were it set in California, no doubt the hospital would have been ours.
My son suffers from a genetic condition which caused a cleft lip and palate. Genetics being what they are, it caused an array of other things as well. We do not see that with Auggie. He has no vision issues, no speech issues, no breathing issues, and seems to need no follow-up care during the one school year we see him. It is a simplified Hollywood approach to creating a character that could repulse some but is otherwise totally normal, so normal folks can still identify with him.
Were he real, we would see one or two doctor appointments and, for a kid like him, I suspect they would go like ours. Everything he imagines experiencing at school, he would actually experience with his nurses and doctors. It would be a place of incredible love, cheering for him, delighting in him, celebrating him for who he is. His mother, father and sister would not be the only ones to really see him. 27 surgeries are not done anonymously. 27 surgeries mean hospital stays for this mysterious condition. That means you get to know the nurses and doctors. Relationships are built in those moments of trauma when the staff is doing everything they can. The emotions are so raw at times of crisis that bonding happens fast.
And life continues to move. The nurses in my son’s unit took me to triage when I thought I was having a miscarriage. They grieved with me when my daughter was stillborn. They talked design with me when I was lonely. They held back tears as I cried at my son’s pain.
Langham put it succinctly, the rewards in the film were external. In the end, with Hollywood flair, Auggie gets everything he longed for: recognition, love, cheers, a school-wide award. The bad kid is sent away and everyone becomes his friend. This isn’t real life. And that bothered me.
The rewards are internal, not external. For every person who learns my son’s story, there is another stranger asking me a question. For every friend who wants to hear exactly how the palate is lengthened, there is a family member who cannot remember that each fever means a hospitalization. That won’t change, but we change, and that is a good thing.
I do not like things built just to pull at heartstrings. It is deceptive and painful when you know it can never be. My son is young and has not been bullied, but I can imagine the heartache or anger for those watching this who know how romanticized the vision is. External total validation is not the goal, though it would feel good. It is nice and tidy for those who do not actually live it. Matthew Crawley walks again. Auggie gets the award. Everybody cheers.
It is better to have this film, then not to have it. It is a step in the right direction. There were wonderful moments in this movie, but lacking the insider perspective, it lacked the insider’s strength. Repulsed by the external appearance, it looked for external validation.
It is true that kids who suffer can have an impact on the world around them, but not by fitting in, overcoming differences, but rather by waking people up to the world of suffering with joy, of not letting suffering define life.
In the back of the church, I lifted my son’s shirt to push pain medicine through his g-tube. His exposed torso showed off his g-tube button, his Broviac and Broviac dressing. A man looked on while my son laughed, sang and pretended to be a monster while I took care of business. “He actually just had surgery three days ago,” I said.
“Ah, poor little guy,” the man said, yet I could hear in his voice he did not believe it. Peter was not poor. At the sign of Peter’s joy, I could hear in the man’s voice, wonder.

Some people suffer every day, and others who do not, think, “I couldn’t handle that,” but you could. Life goes on in the midst of suffering. I hope our kids can at least teach us that.